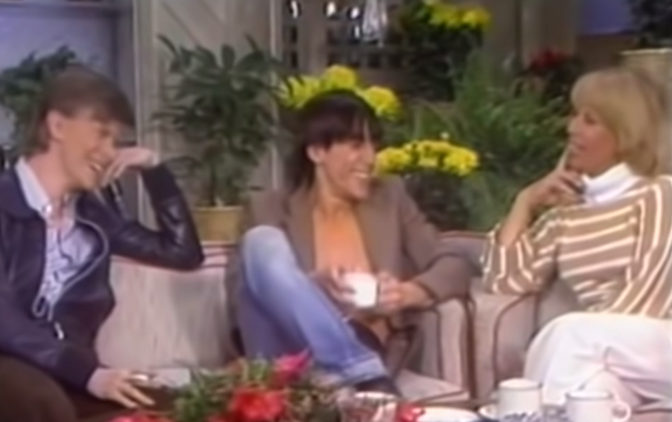 I saw Iggy Pop on the Dinah Shore show on YouTube last night. He’s touring The Idiot with Bowie and they sit on the chat show sofa together and are interviewed by two grey haired American Nans. I think it’s fair to suggest that this was from a moment when the artist used the lens of the media to full affect. Iggy and David come across as articulate, well read, curious and engaged. Their showmanship on the sofa itself – was a necessary component of a time when the artist was able to magnify and distort themselves through the way information was disseminated. Moving televised images allowed Iggy’s body to pulsate and writhe through the American mind, The TV Eye becoming both critiqued and embraced – absorbed by his carnality.

The footage itself on YouTube is grainy and distorted, it flickers like an interlude between the past and the present. Contemporary adverts appear over the clip, like a simulated distortion of the present, reminding me just how far removed these figures are to us now. As if they were passengers on a lost ship, their gaunt-ghostly bodies flickering, spectres dissolved into the age of the aeroplane and motorcar. The currency of their words fused with the evaporation of engine fuel, slowly absorbed into the atmosphere that we breath now.

Hals Foster quotes the film-maker Harun Farocki quoting Carl Schmitt, in the book “What Comes After Farce” (this itself, part of the ceaseless terminal quotation process),

““If the immanent rationalization of the technically organized world is implemented completely,” Schmitt wrote in 1963, “then the partisan will perhaps not even be a troublemaker. Then he will vanish of his accord in the frictionless performance of technical-functional processes, no different than the disappearance of a dog from the freeway.””

This disappearance is what I felt when I watched the clip last night. Iggy and Bowie – the possibility of artists operating through mainstream channels whilst simultaneously critiquing those channels has now disappeared. Iggy’s first interest was politics, apparently wanting to run for president at high school but decided to use performance art, as in Rock and Roll – to subvert and challenge accepted norms. The information channels currently available to us do not offer the freedom that Iggy and David needed in order to be both critical and popular. The current mechanisation of media systems has forced the critical artist to exist in a terminal blackout, operating either as a popular figure within a marginal genre  – such as contemporary performance art practice (which I’m not knocking) – or they are forced to queue in line, lobotomized for the talent show audition.

The terminal quotation process I briefly alluded to has some baring on this possibly. As information gets distorted through the multiplicity of its communication systems – so the purity of its content becomes dissolved through repetition – this is of course a common formula and one that’s easily understood. However, in the realm of Art – and especially artforms that are rooted in the channels of popular entertainment, like Pop Music, this has forced the extinction of the medium – and what remains, is a hollowed out appendage branded with the emotional-vacuity of consumerist icons.

Chillingly, it is alleged that before Bowie died, he left a final message via the forum on his website -

“Google’s motto is BS. They are destroying the most glorious gift humanity was granted in the last 300 years. Google is Illuminati, Illuminati is Google.”